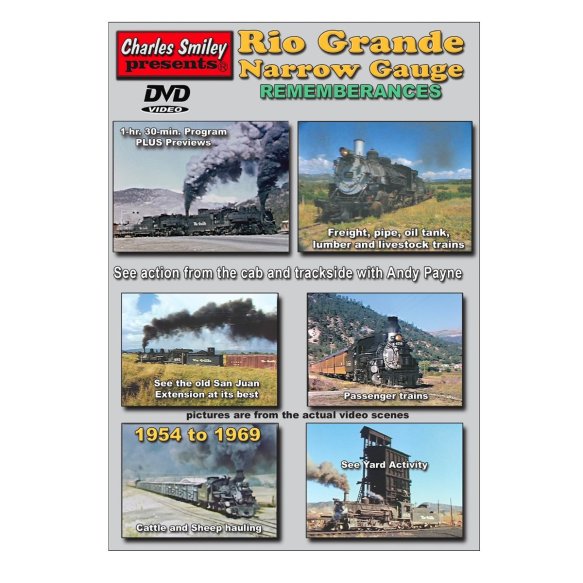 A fascinating, time travel visit, into vintage Rio Grande Narrow Gauge steam. Andy Payne was a Rio Grande Engineer. He was also an independent Railfan / Cinematographer. Early on, he acquired a Bolex 16mm movie camera. Filmed mostly in 16mm. All films are full color. Only some highlights here. 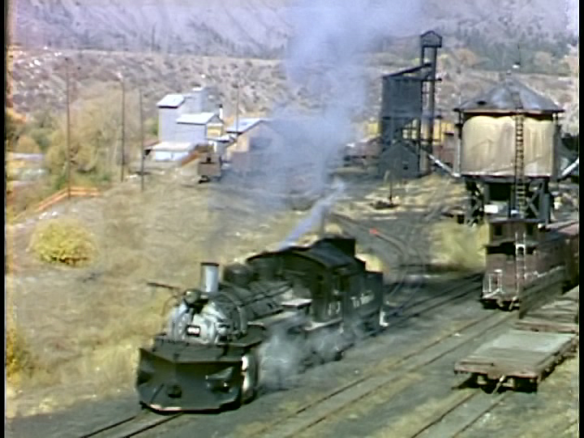 The earliest films are in 8 mm. Those are very good, for their age. Durango is above. The gems are the 16mm films. Excellent quality! Nearly all freight trains. 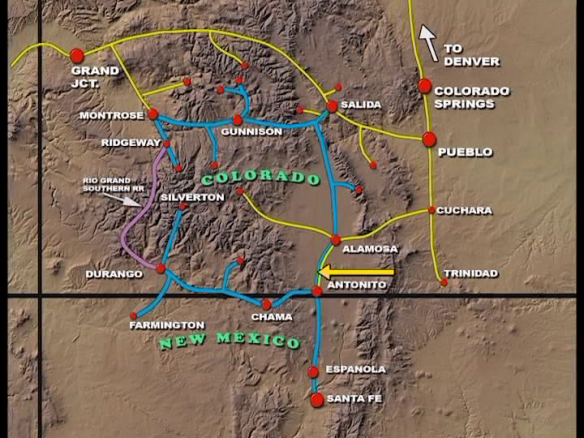 Alamosa to Antonito dual guage trackage. This on the San Juan Extension. This line continues towards Laboto Trestle.

The old freight cars are bursting with character! Railfans and Model Railroaders will have a grand time, with the varied equipment.

Andy has detailed Hostler duties and discussion of steam locomotive fire. This is unique amount many steam shows!

Old Arboles area is shown, before a water dam project buried this area. A highline is being installed. Navajo River. 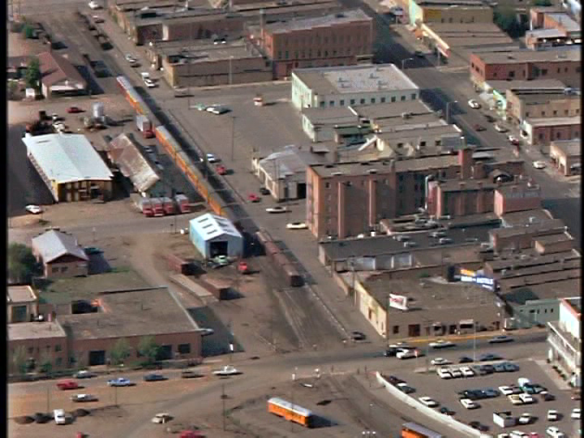 The Durango Loop was Railroad built around 1967.

See how to get a Mike rerailed, without a crane.

A number of Hollywood feature films were filmed, in part at or near Durango.

Oil and the Freight business. Farmington Branchline in 1955. South of Durango. Carbon Jct. had a small switch yard.

Model Railroaders will get a kick out of seeing GRAMPS oil tank cars!

Declining traffic spelled the end of the San Juan Extension.

Andy filmed Springtime snow and slide clearing of the Silverton line. An old Caterpillar bulldozer does the job!

This is a wonderful collection of vintage Rio Grande Narrow Gauge action! Inclusion of rare locations and singular viewpoints, set it apart from the competition. Not too mention Andy Payne’s first person accounts of the action. Harvey Laner provides the bulk of a clear narrative. Many are interview style, with his friend Andy.

Starting as a Los Angeles Transit Motorman. Andy hired on as Fireman with DRGW in 1957. He loved his work and filming the trains. He passed away in 2012.

Charles Smiley organized everything, into a highly enjoyable viewing experience! As usual, it shall take multiple viewings to get it all in. The 90 minutes literally fly-by. Always the mark of a fun program.

This is a must see, for Rio Grande and Narrow Gauge steam fans.

Another entry in The Heritage Series by Diverging Clear. Somewhat, rarer material that has predecessor CSX paint in good quantity. Although in the later years, more normal CSX is present. Historical value is obvious. Non existent scenes are here.

Mary McPherson with a relaxed narrative. Colors are weaker than similar, Heritage recent releases. Picture quality is ranging from good to very good. Realize, these are earlier years. Equipment limitations on original lighting and videotape aging, effect the results. Still, everything is watchable. Nothing too weird. A bit green or yellow sometimes. 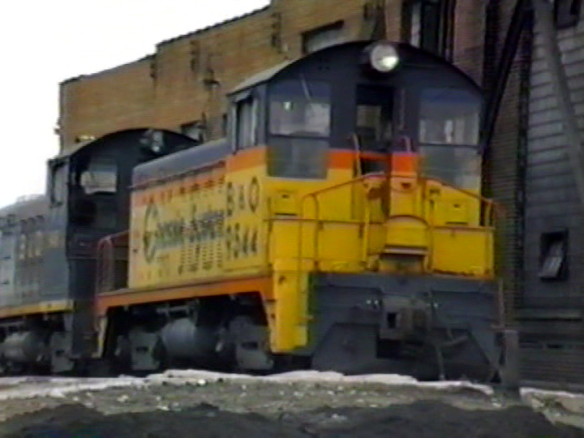 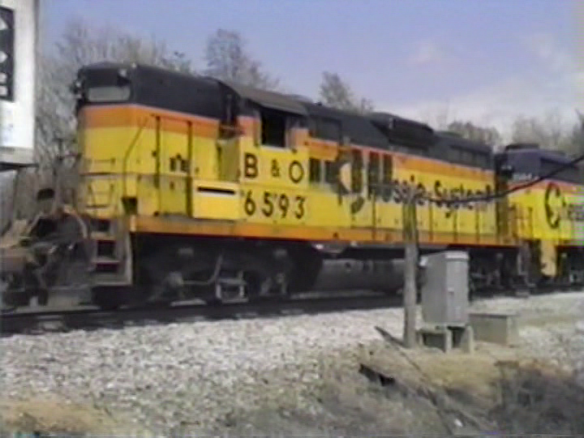 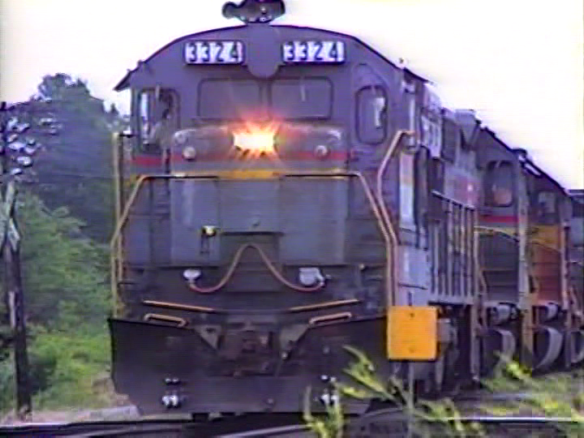 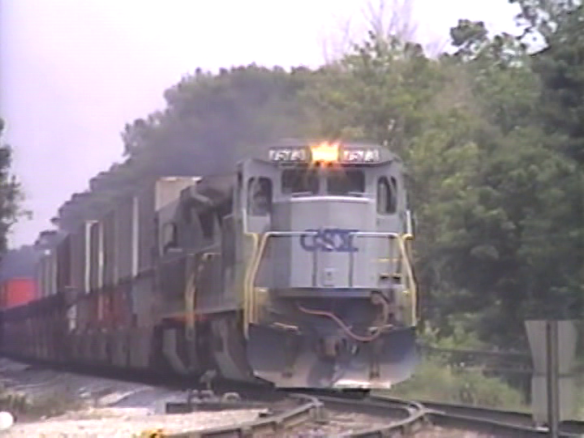 Odin has newer CSX locomotives. Salem shows even more. Too much repeition on these C40 units, for me.

Operation Redblock livery on this GP38. At Vincennes, IN. with a local.

Seaboard System and Family Lines, are found in the earlier years. In 1985, some cabooses. Note the rare, GP16 on the lead.

Pretty typical, for a Diverging Clear, Heritage Series. It does contain some  harder to find, circa 1985 and 1991 action. Those scenes are the highlights of this show. Remainder is dominant CSX gray. This is where I would have cut film, in a major fashion. 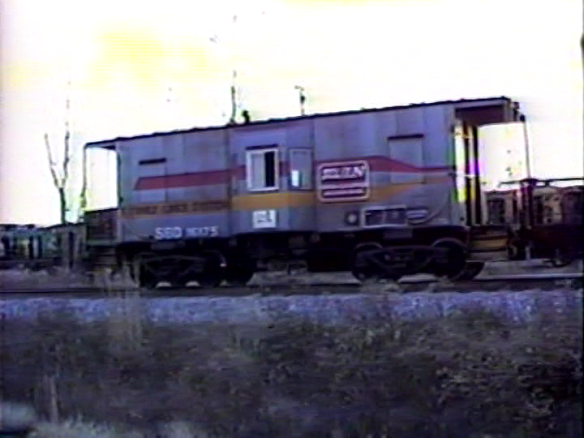 A Family Lines caboose, wears SBD reporting marks. Bet you thought it would be a Chessie System!

I am not much for repetion. She is the opposite. So, depending on your point of view. Too long or never enough, timewise.

Being the reviewer. I will perform my role. Runs too long. There are good nuggets. So, worthy for those. If you like early CSX, it’s in there. 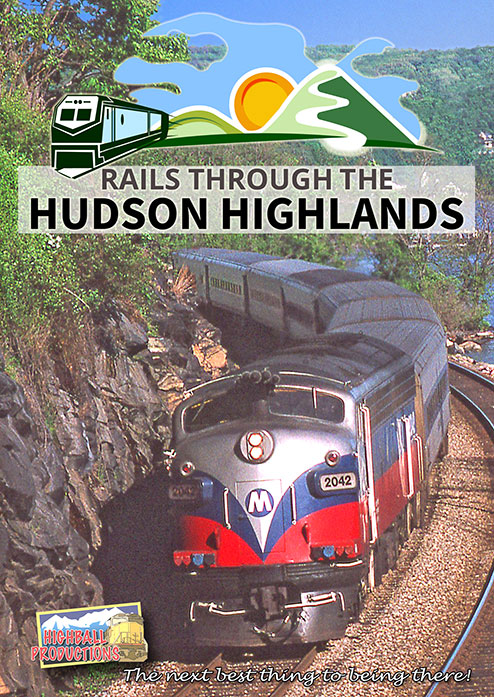 A new, 2020 remaster of a 1990 show. Have not seen the original show. Review will be on this, current release (obviously).

A single DVD-R. Master menu. Feature and Pentrex previews. Detailed Chapter Menu. This one offers locations. On screen graphics, with locations. No map.Peter Falconi handles the narration. Natural audio, for the main of the soundtrack.

Video quality is not modern viewing standards. The colors are very good. Variable imagery, as the camera adjusts to lighting on many scenes. Historical value is the consideration. Plenty to see. Checkout some highlights…

Conrail B23-7 pair, with  a Tarrytown freight. 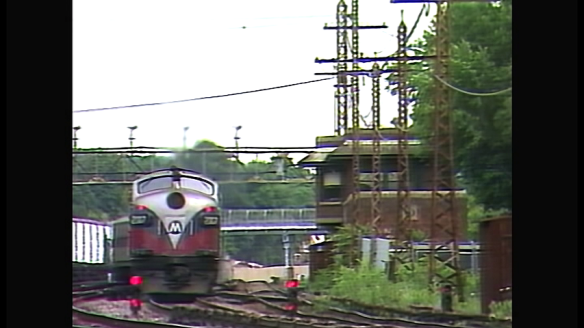 Croton-on-Hudson. Worth a mention. The interlocking was still in service.

Amtrak has frequent trains. Would have liked to hear what the moves are. In fact, some of the trainsets themselves, should have been discussed.

The narrative is only as valuable, as the base script. Find the information is lightweight, overall. He mentions these SPB units. Never heard of them! Missed opportunity, to engage unfamiliar audience members.

Peekskill, NY. Here is the beginning of Hudson Highlands. The fl9 are in push pull. On the rear of this inbound.

Metro North had to be the ugliest paint, this side of Chicago’s Metra. 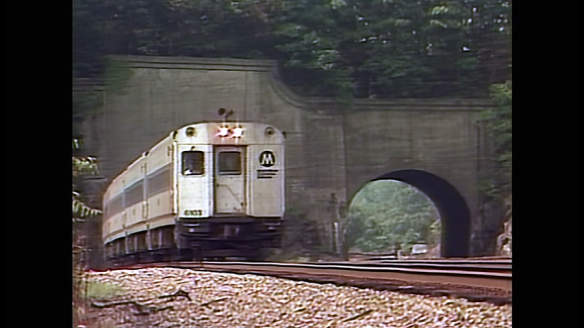 Breakneck Tunnel is a scenic one. Note the FL9 units, are now pushing the train.

Old building is a pumping station.

Checking out the River Line. A few freights. These are some long telephotos. Across the Hudson River!

Garrison, has this often filmed tunnel.

Pougkeepsie, marks the end of Metro North territory. Also, the endpoint of this show. 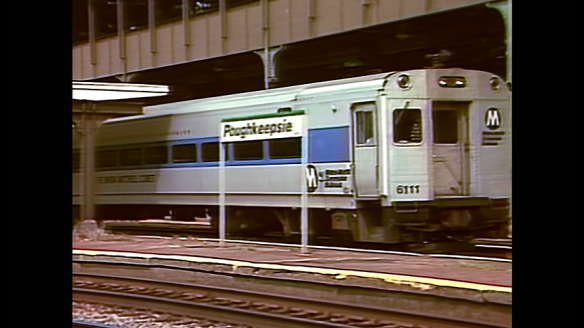 Rails Through the Hudson Highlands. It delivers on the advertised tour. The fresh remaster presents it, in best possible quality. Old videotape has limitations.

The length is fine. Enough to see the highlights. Not overly long, to reach boredom. There is variety, amoung the many passenger trains. Even the venerable FL-9 model, appears in various liveries!

All in all, a good look at Hudson River rail action circa 1990. Nice to see it, in a remaster.

The second part to Rotaries, Avalanche on the Mountain. A Flanger train is stuck under an avalanche. The Rotary Snowplow gets dispatched from Truckee! Well, not exactly…

Similar documentary style, as the original show. Employee narration via interviews. Other times, it is radio traffic. On-screen graphics, also convey various information. There is a narrator, to round things out. 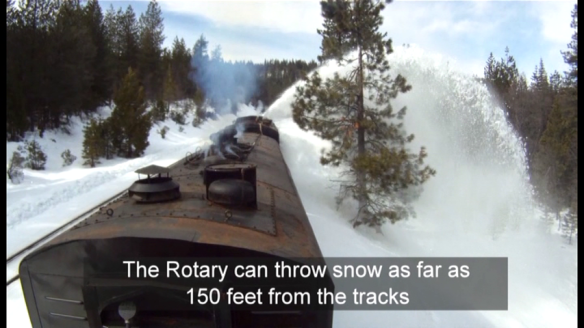 This program begins with the Flanger train, stuck in an avalanche. Where we were left hanging, at the end of that show. There is commentary, about the incident here. Even still photographs.

I was fully expecting to see a rescue mounted to the beleaguered Flanger. In fact, as a Rotary is dispatched from Truckee, it appears to be the case. However, that’s all folks.

Now, the story is redirected. The massive snowfall. Following the Rotary, as it works hard, to clear the mainline through Donner Pass. The Snow Service operation works, day and night.

The Rotary Train must travel all the way down to Roseville. In order to clear the.line and turnaround. 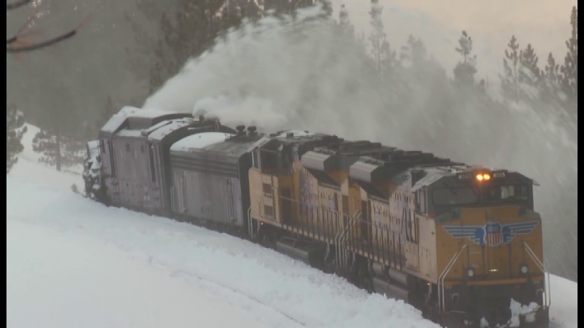 Rotary 209 has some derailments in the heavy snow! This is tricky work. Snow drifts at least 10 feet high. Big Union Pacific GE AC locomotives are assigned to this train. The EMD F7B is the Rotary’s power.

The height of the snow, can be hard to judge. Check this signal tower.

Difficult going at Cisco. Back and forth. The Rotary wants to climb off the tracks. The locomotives experience wheel slip. The crew spends hours battling through.

A sideview of the Rotary. 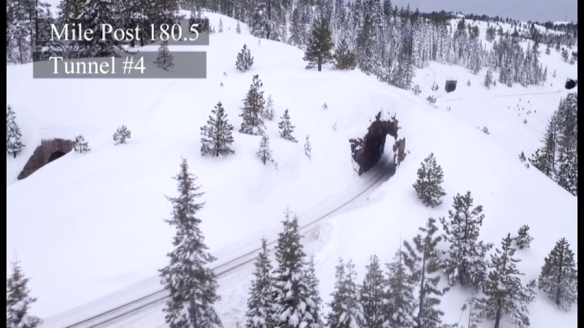 Some fantastic aerial drone views. These appear to be a recent addition.

The camera does spend a lengthy amount of time, in this position. Could have used some narration, during this stretch. Definitely.

The magic of the original show. A combination of the outstanding videography and employee commentary. The way that was edited, gave the show a unique flavor. Those same elements are present in the initial stages, but drops off. A worthy show to add to the collection.

Here is a current visit to world famous, Cajon Pass! The 14 miles, refers to the length. Operating freight traffic, is by Union Pacific and BNSF. Fans of the modern rail scene, are in for quite a treat. 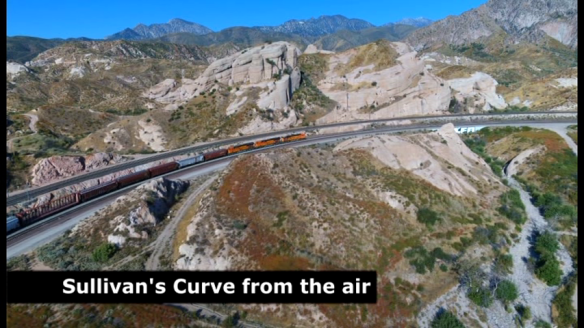 As one would expect from Pentrex, all of the  best known locations are included. Many others, as well. 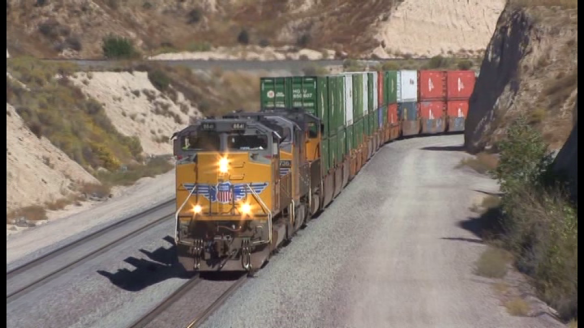 Veteran announcer Dave Drui handles a relaxed script. Informative, yet leaving plenty of space to listen to the trains. So, activate that soundbar!

The busiest railroad, mountain crossing, in the United States. This is the subtitle. Hits the nail on the head! There are 100 scheduled trains daily.

Blue Cut is where the San Andreas Fault is located. A blue CSX accentuates the bluish stone.

It takes quite awhile to change locations sometimes. However, no shortage of traffic.

For those unfamiliar with this part of the country. Note the dry riverbed. These can sometimes becoming raging torrents. Have no idea about this specific one.

An odd moment. Mention of this train breaking down later in the show, causing traffic problems. No further discussion.

A show highlight, is the cut to Cajon 1976 footage! 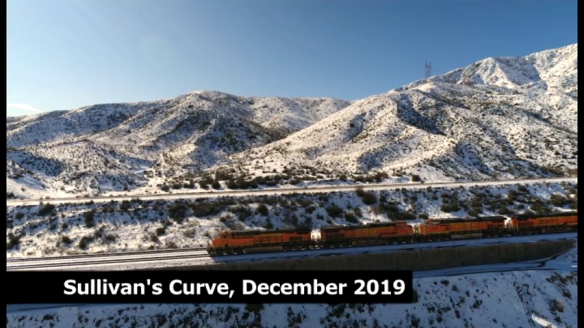 A couple of shots from a rare snowfall are another break, from the unit trains.

Almost missed it! A Chicago and NorthWestern unit, is in the middle of this lash-up.

Cajon Summit is acheived, at the end.

While present day railroading, is not my wheelhouse. The combination of slow trains, and beautiful scenery has its own charm. Hearing the locomotives working hard is another positive.

The two hour length could have been edited down considerably. Certain locations, the camera is planted there, for far too long. Particularly, in the first hour. Unusual, as Pentrex normally picks up and moves! 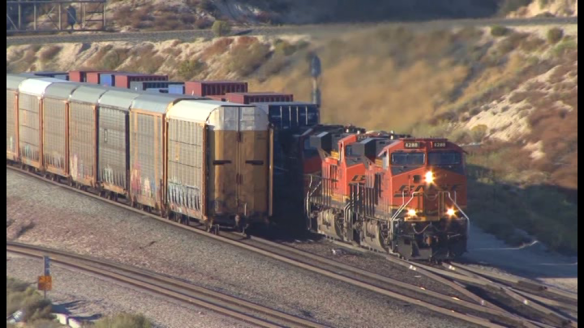 For a show featuring the current railroad scene, special scenery is a must have. Everything else is repetitive. This show is well put together. Although, this era is not to my interest, it is a good show. Recommended, if you enjoy today’s railroading.

About ATVR: Why I Review Train Videos

That is well-over 1/4 Million views.

What Have You Done To Help?

Yes, we are all in a tight spot. Some handle the stress, better than others. A great time, to measure the kind of person that you are!

In these times. We have the opportunity to define ourselves. Instead of: complaining, hoarding or being selfish….
Ask yourself..

Looking for something different? Perhaps a gift for the one who has it all. Checkout some of the: Trolley, Electric and Logging shows.

Diverging Clear. Even more, via the search function.

I originally began reviewing these shows at the request of some who said, that I was missing out. They were right!

The street scenes are like time machines. The woods are a whole different world, too. Women in particular, enjoy the trolley shows!

There are remasters , with stunning results. Upgraded images and audio.

Actually, it’s all new, if one hasn’t seen the film.

Any of these shows can provide years of entertainment. Look around.

Use the cloud and search box.

Have fun! You’ve got the edge.

Scroll down to the Featured Producers. A ton of great titles!

A BIG Thank You, to those who have supported this site. Present and past. Far exceeded my original goals. We accomplished this together. See the listed Featured Producers, for the heavy lifters.

They receive, no favoritism on reviews. Yet, they help make this possible. They put their shows on the line. For all to see. Admirable. That takes guts!!

How can you respond?

Support those who help us!

Let them know, that you read these reviews.

Other shows, I acquired on my own. To balance the site. Dedication.

I have had collectors Thank me for these reviews. Helping them, with their collections. That’s why I do this.You are Welcome!

Specific questions, and review requests, should be directed to the show’s producer.

New readers may read the About ATVR: page. Review criteria and ratings are explained.