The Hidden Wonder of the World

Here is a new release from Nimbus Films. It was a surprise to receive this for a review. This train video program, is an unusual one. A modern day treasure hunt. We seek the remaining portions of the original Transcontinental Railroad. The Central Pacific Railroad was the western railroad, who had the task to build eastward from California. Abraham Lincoln was the US President, at the time. The scope of the search is from Sacramento to Donner Summit. Originally, the line was constructed in the 1860’s. After 150 years have passed, what could still exist?

Bill George has produced this show. He is going to be our host. A very few, abandoned railroad lines have been sought out within train videos. Those generally have a segment on an abandoned line. The Transcontinental would have to rank at the top, of any list.

Central Pacific Railroad was a historical center point of American history at that time. Who hasn’t seen the two steam engines, nose to nose, with a crowd, at Promontory Point? Throw in the ‘Golden Spike’, and this story is steeped in: major, historical creditability.

Sacramento alone was the focal point for: The Gold Rush, The Pony Express and The Transcontinental Railroad. Definitely, this search is worthy of a feature program.

BA Productions has filmed and edited the show. If you are familiar with BA, then you already are aware of the high quality of their productions. If you have not seen a BA show, they are in the top tier of train video production companies.

That being said, the level of cinematography is very high quality. Fantastic aerial photography gives some spectacular overviews of different areas. From the Sacramento cityscape, to the wilds of the Sierra Nevada Mountains, this does contain beautiful scenes.

Presentation is in the PBS-style. An excellent format choice, especially for this historical based story. Guests are shown and they add much extra background. Fine music is included, and this allows for some brief musical interludes. Period photographs are used sparingly, this is a modern day look, but do give that important connection to the past. 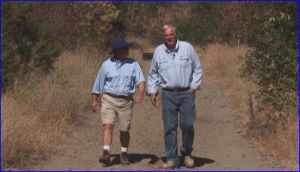 Chris Graves is a Transcontinental historian. Knowledgeable and congenial, he acts as a guide. Mr. Graves knows the former railroad well. We will walk the old roadbed with him, and Bill George. Together, they explore some sections of the original roadbed, and tunnels, on the former Central Pacific Railroad.

The fact that this feat of construction was accomplished with hand tools and explosives, is incredible! Many Chinese workers were employed in the building of the railroad.

Nice map reference outlines the route of the original railroad. The locations are familiar to any fan of this area. Begins in old Sacramento, Roseville, Colfax to Cisco. Donner Summit is the ‘end of the line’, for this treasure hunt. Our route map reviewed, the territory defined, onward we go!

Kyle Wyatt, is a curator at the California State Railroad Museum, Sacramento. Transcontinental exhibits are shown at the museum. Mr. Wyatt adds more background. Much more at the old section of the city is offered. A solid foundation is laid for the story.

Proceeding to some of the right of way near Newcastle. The line can be hiked on a ‘wide path’. Rock ballast, plus the old cut and fill work, reveal the true nature of this path. Antique telegraph poles still remain.

Auburn is the next town visited. Bloomer Cut is nearby. This section, is still used today! An interesting feature, this segues into our first tunnel. Tunnel Zero appears in good condition.

Just past Colfax, the scenery transforms into spectacular mountain vistas!

Were Chinese workers lowered in baskets, to work on the mountainside? The question of this local legendary tale is answered. We are over 1,000 feet above the American River, and its canyon.

Red Mountain is the spot where Signal Peak served as a fire lookout station, until 1934. Fine segment with a local, describing the building, and operation back in those days.

Summit Tunnel, aka: Tunnel 6 is another old tunnel. This one exceeds 1,000 feet. Completed in 1867. The rock is solid granite. Also, there are still a couple of miles with old, wooden snowsheds. 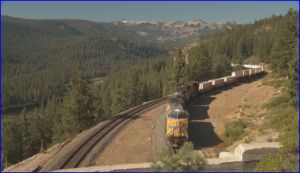 American Train Video Reviews has always provided programs containing trains in action. This historical focused show contains nearly no operating trains. A few cameos by Amtrak and Union Pacific. An odd entry on this site. Does this type of program work for railfans?

This show has many compelling attributes. Gorgeous photography that pales in comparison, with mere words to describe. A well written script, interesting subject matter, historical values and it ties everything together within the context of ‘in the modern day’.

Nimbus Films and BA Productions have given railfans an outstanding show. This could easily be broadcast to appeal to the general public. Women will like this ‘train video’. Anyone with interests ranging from: US History, Photography/ Film, to  American Railroads will find this an enjoyable program.

About ATVR: Why I Review Train Videos

That is well-over 1/4 Million views.

What Have You Done To Help?

Yes, we are all in a tight spot. Some handle the stress, better than others. A great time, to measure the kind of person that you are!

In these times. We have the opportunity to define ourselves. Instead of: complaining, hoarding or being selfish….
Ask yourself..

Looking for something different? Perhaps a gift for the one who has it all. Checkout some of the: Trolley, Electric and Logging shows.

Diverging Clear. Even more, via the search function.

I originally began reviewing these shows at the request of some who said, that I was missing out. They were right!

The street scenes are like time machines. The woods are a whole different world, too. Women in particular, enjoy the trolley shows!

There are remasters , with stunning results. Upgraded images and audio.

Actually, it’s all new, if one hasn’t seen the film.

Any of these shows can provide years of entertainment. Look around.

Use the cloud and search box.

Have fun! You’ve got the edge.

Scroll down to the Featured Producers. A ton of great titles!

A BIG Thank You, to those who have supported this site. Present and past. Far exceeded my original goals. We accomplished this together. See the listed Featured Producers, for the heavy lifters.

They receive, no favoritism on reviews. Yet, they help make this possible. They put their shows on the line. For all to see. Admirable. That takes guts!!

How can you respond?

Support those who help us!

Let them know, that you read these reviews.

Other shows, I acquired on my own. To balance the site. Dedication.

I have had collectors Thank me for these reviews. Helping them, with their collections. That’s why I do this.You are Welcome!

Specific questions, and review requests, should be directed to the show’s producer.

New readers may read the About ATVR: page. Review criteria and ratings are explained.