In the Steam Era, Kansas City would have been foreign territory, to a Union Pacific Big Boy. Times change and the 4014 attained KC, in 2019. This was the final run for 2019.

This show is on a DVD-R. It has a new style menu! The Top Menu is overlayed on a map. A detailed pictured Chapter Menu, lists locations. Quite modern. Also, a preview section and the music video.

A full page map is displayed, near the beginning of the show. On screen graphics denote locations. David Drui narrates.

This leg of the tour, begins in Arkansas.

Vintage film of 4014 is included. Retirement of the 4014, was in 1961. Brief history includes a little bit of 4014 update. Previous Pentrex Big Boy shows are referenced in this program.

Kansas City is next. The Union Station has been beautifully restored.

The Highline bridge is well documented, as waiting for the Big Boy to appear.Outstanding aerial view, as the 4014 is paced.

Additional drone footage is great! The train moves at a leisurely be pace towards Topeka. Sure is an advance, over endless runbys. As found in an average modern, steam show.

Arrival at Topeka. A restored UP station, now a museum. 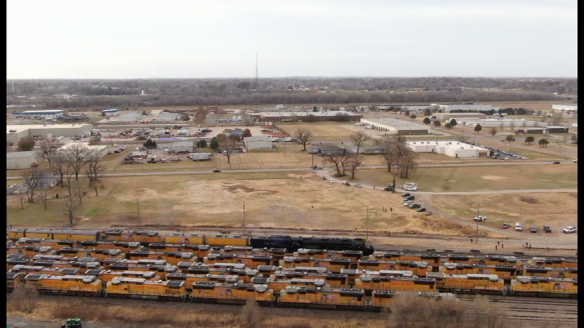 A large amount of stored power at North Topeka. Evidence of changing opearational practices! Just a single yard. Think about it.

Are we there yet?

Frequently referenced in old Western movies. This is Abilene. A modern canyon, created by grain elevators. 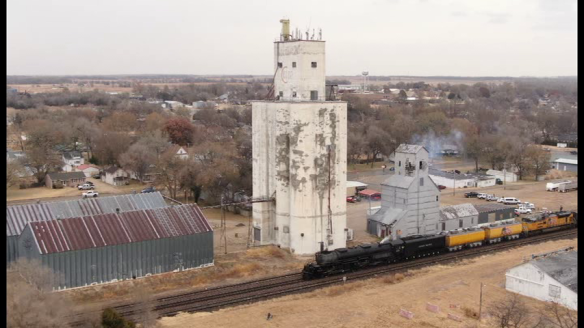 Pentrex breaks the monotony, with a music video. It’s about the UP 9000 locomotive. Nebraska is the band. 9000 is the song.

Pretty amazing accomplishment. To obtain this amount of aerial. Not to be critical. If nature doesn’t cooperate, the results would be far less useable. Nearly all the scenes are perfect. Just be sure to appreciate it! 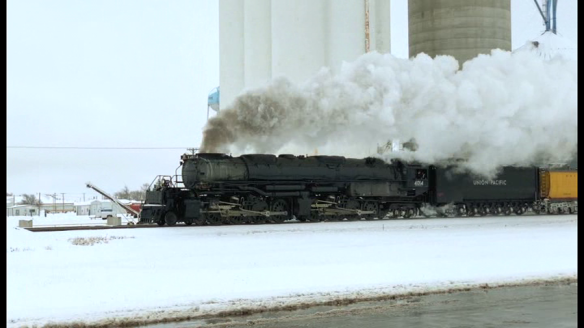 A snowstorm is encountered. It is an improvement, over the brown fields.

If there is one new item learned with this aerial tour of rural Kansas. Not a burger joint in sight! Better pack a lunch. Lol. 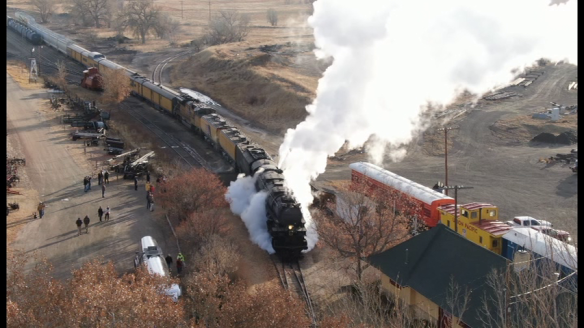 Arrival at Denver is in clear conditions. The city skyline is in the background.

Departing Denver, blizzard conditions are on hand the following morning.

The aerial approach makes this show! Rural Kansas in drab November, is not very scenic. The weather is favorable, for the majority of the time. The Big Boy is the star. Expert camerawork makes this program fly. Smartly paced and an interesting script, move this tour along. Pentrex can sure dance! They certainly elevate this one.

While this release doesn’t have the natural, scenic advantages. The aerial videography, makes it a worthy addition, to any Big Boy collection!