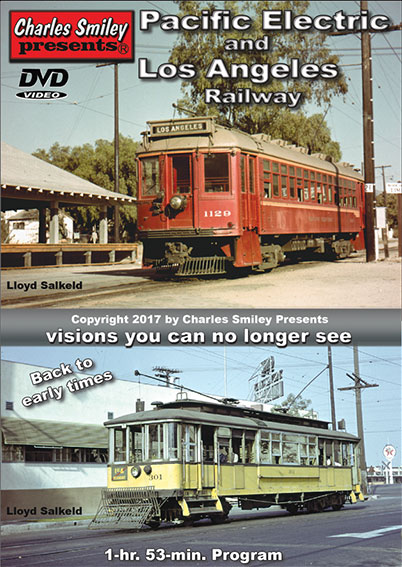 Charles Smiley Presents with a double feature. The two streetcar lines, that once served Los Angeles, and vicinity. Pacific Electric is the much larger of the two companies. Los Angeles Railway is the second company.

Both had extensive coverage in their territories. Originally construction, was before the common usage of automobiles and freeways. The commuters traveled in much different fashion. 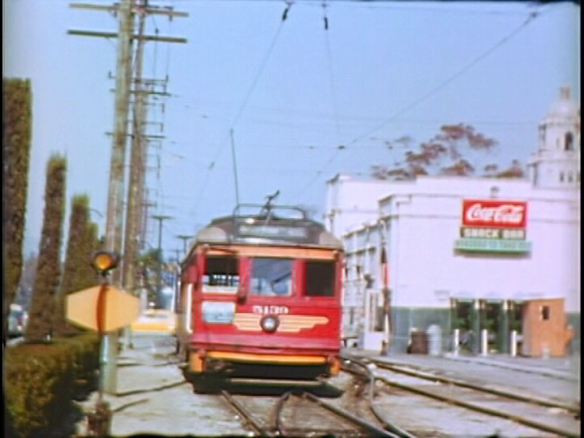 There is much color movie film, to document the cornucopia of various, equipment and lines. Which serve the area. Years of the restored color footage. They are from 1940 to 1963. Though the scope of the show, goes back earlier in time.

This show is loaded with extras. A factory pressed DVD. Detailed Chapter Menu. A long preview section that runs for 20 minutes.

Custom made Maps throughout. Any line that is discussed, gets highlighted.

On-screen graphics that have all sorts of additional information. These details augment the on going discussions.

Varied soundtrack. Notice the high level of detail on enviornmental scenes. Hear the auto traffic on some scenes? Hear the flanges squeel, as a trolley hits a turn? Background music elsewhere. Simply, too much to cover everything within, this fully loaded program. This collection of films must be rare. Let’s hit on some highlights…

IF you haven’t seen a Charles Smiley Presents yet. You are in for a treat! These are: part train video, part history lesson, extra information, at no extra charge! All neatly wrapped in a PBS style program. Charles Smiley narrates. 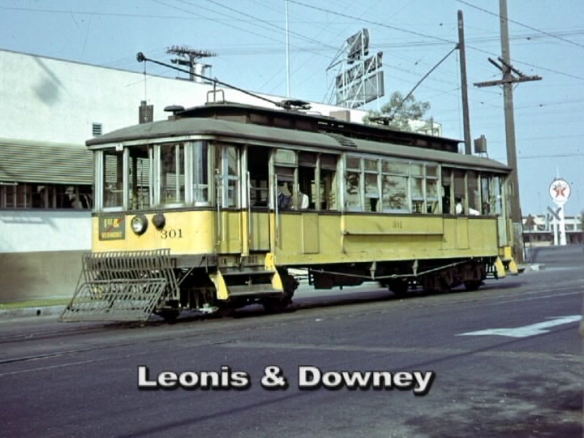 Los Angeles Railway was Henry Huntington’s, from 1898. This also extended past the city limits, although not so far. Yellow and green colors.

Later on, the so called, fruit salad colors came into usage.

A small portion of the Oakland Key System is included, into this story. Another, El Paso, Texas to Mexico, as well!  Plus more. Learn the dispositions of various streetcars.

Here , at Inglewood viewers get a sense of streetcars running in traffic. Check those two sets of rails. 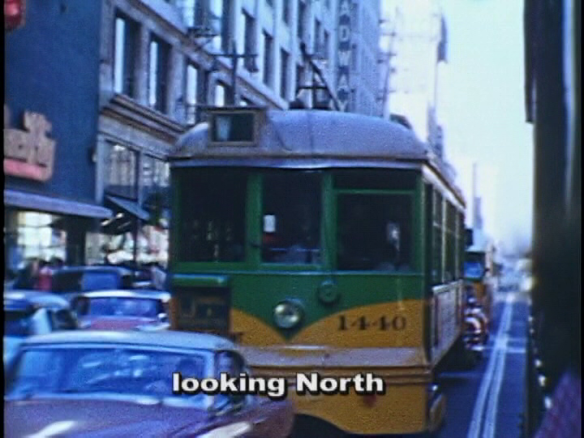 Later, the now numerous  cars in the downtown area, brought resentment towards the big streetcars.

Watts Station is on the right.

This Watts bound car, originated up on a substantial  elevated platform.

Electric buses are even included! 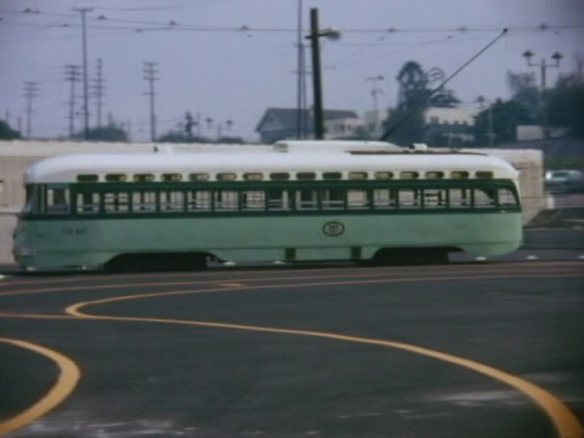 Notice how massive the streetcar is compared to the bus. 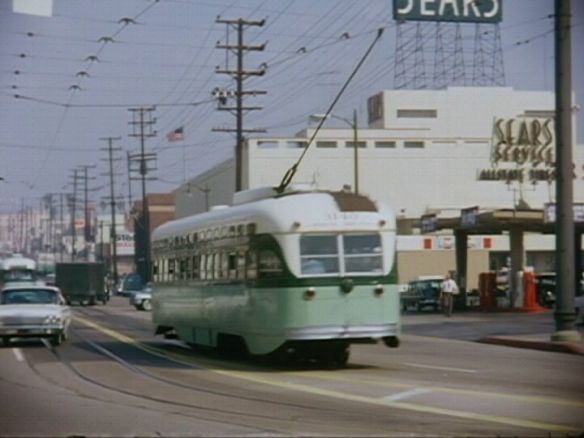 The old Sears building on the P line is gone. Resembles other vintage Sears, in other parts of the US.

The diminutive white safety zones, in the middle of busy streets. These are almost a joke by modern standards.

Here is a scene with potential for Model Railroaders. Have a trolley line that; dead ends, near a standard gauge track!

The many onboard rides, give viewers the feel of streetcar transportation. Assorted lines and years. Fascinating material. 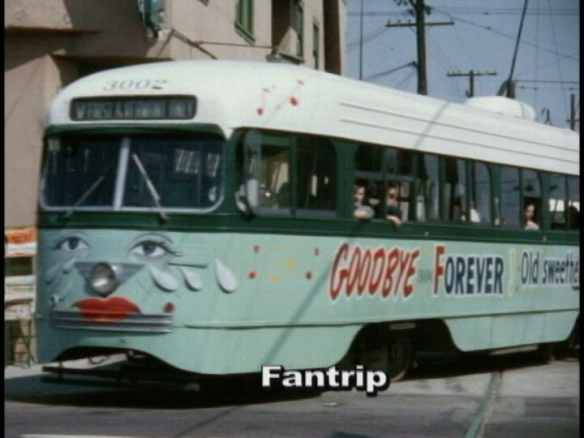 A final fantrip with a couple of streetcars. A discontinued line, complete with rusty rails. Amazing! 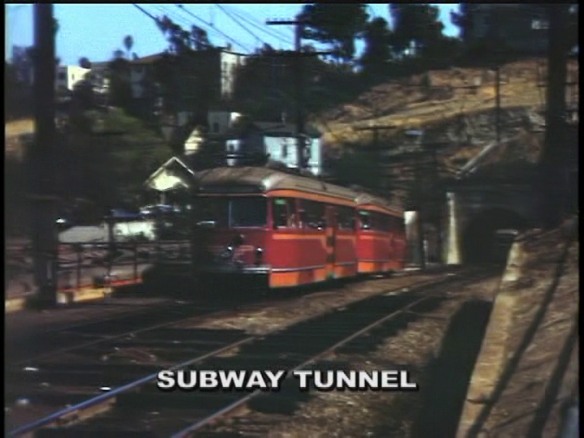 These trolley subjects offer a time machine visit into the past. One doesn’t have to be from Los Angeles to enjoy this either. Plenty of these scenes no longer exist. 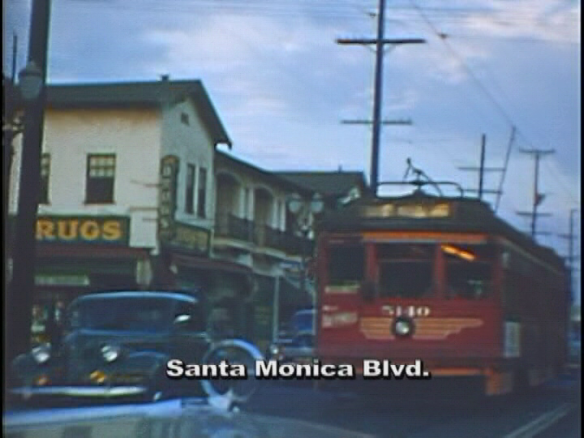 Vintage is vintage! Autos, trucks, pedestrians, businesses, and the chance to witness the changes. Fascinating material that you see in fine quality here. There is simply too much, to retain everything in a single viewing. That is good news. Rerun value. Suitable and interesting, for family viewing.