The GP9e, SD7e and SD9e locomotives.  These Southern Pacific rebuilds, were making their last stand, in local rail service in 1994.

In this show, they are viewed in an agricultural region of central California. Bakersfield to Sacramento.

If you are asking about the odd title. ‘Geeps and Cadillacs’. Here is some background info.

Geeps were a nickname for early GP7 and GP9 diesels. Cadillac was a moniker used by Southern Pacific crews for SD7 and SD9 locomotives. In the old days, the long wheelbase units were smooth riders, like a Cadillac automobile.

In fact, the term Geep was used in the post World War 2 era. GP stood for General Purpose locomotive, as used by Electromotive. Supposedly, the comparison was to the utilitarian characteristics of the US Army Jeeps. GP7 and GP9 models were the all purpose diesels of the 1950’s. 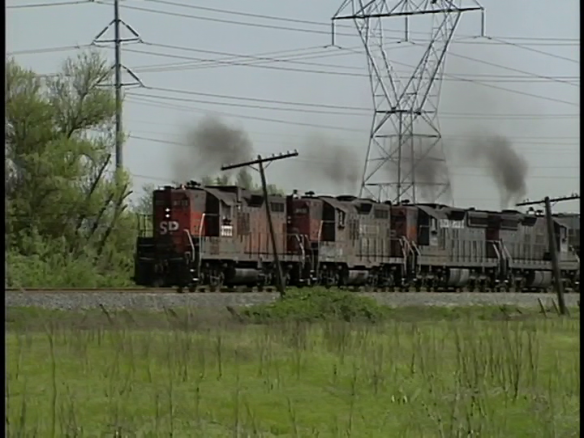 Seems as if any EMD with 4 axle trucks ended up, being called a Geep.

Perhaps, this transition of the nickname illustrates the nature of the original General Purpose designation.

A Geep will do everything on the railroad. By the way, the majority this discussion is not present, in the script. Interesting background though, isn’t it?

Have a VHS tape of this show from years ago.

Let’s checkout the DVD version. I have read, that Pentrex carefully upgrades and transfers their shows to the DVD format. A time consuming process. In fact, a rather large number of Pentrex shows have yet to be released on a DVD.

Major upgrade on the DVD picture quality! Audio sounds great, as well. It is a remaster, after watching the disc.

A detailed Chapter Menu is a welcome addition to now have included. 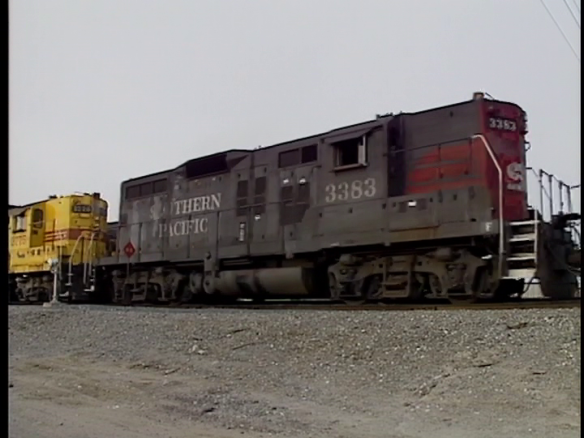 Narration is the usual pro quality that we expect from Pentrex. The narrative will keep us current and informed, of every train in the scenes. Natural audio sounds are the main background. Camerawork and audio is fine overall.

Southern Pacific was still utilizing these 40 year old EMD locomotives in the 1990’s. The rebuilt GP9, SD7 and SD9 models were operating in Central California. While many other roads rebuilds had their noses chopped, SP units retained the high hoods.

Stockton Yard offers our best chance for close up looks at SD7/9 diesels. A GP9 is still in SP Kodachrome. The paint was for the failed SPSF merger.

A pair of good looking GP9E locos haul The Turlock local out of Stockton Yard.

The Lodi local gets featured as it performs switching at Lodi, with a pair of GP9E diesels.

There is a great segment of SP street running in the downtown area. Other through trains behind GP9 and SD7/9 lash-ups are interspersed with the locals workday.

At Galt, the local turns onto the Ione branch. Good edits let many freight cars pass for the viewer to watch. 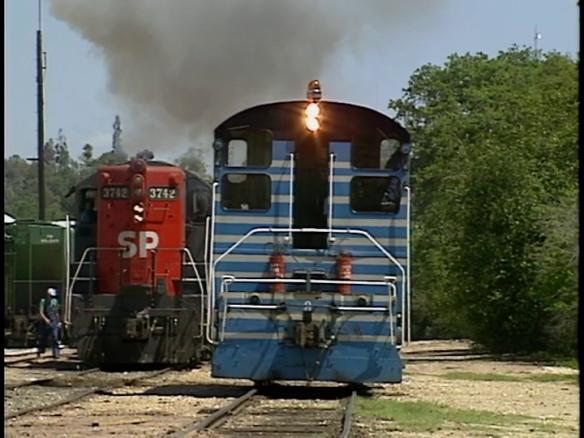 In Ione, there is interchange with Amador Central. A rare Baldwin S12 waits for SP to drop it’s cars. The SP train picks up a string of cars for the return to Galt. 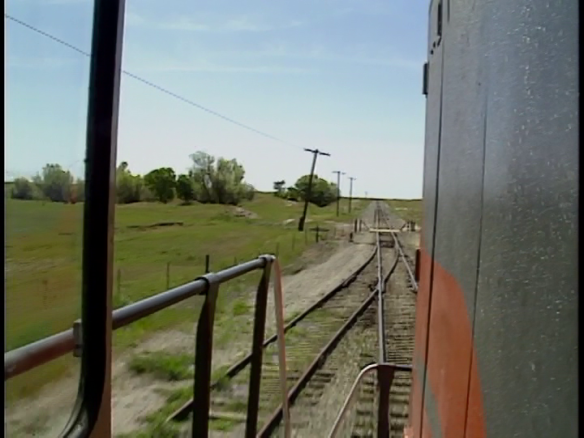 A cab ride in the lead GP9E 3742 is our way back to the mainline at Galt. It would have been good to hear some commentary from the Engineer. We do spend time watching him work the controls and drive the train. His silence feels odd. Back to exteriors and end of program. The Lodi local occupies a large portion of this show. Maybe a bit too much.

Based on the title, I was expecting equal coverage of the SD ‘Cadillacs’. Those SD7/9 units, are seen in the lash-ups, on the mainline freights. Expected more focus.

SP’s Geeps and Cadillacs. Vintage Workhorses. A final visit to Southern Pacific’s title fleet. Delivers as advertised. The local overstays at the party. Otherwise, the presentation is fine.

A nice upgrade on the DVD!