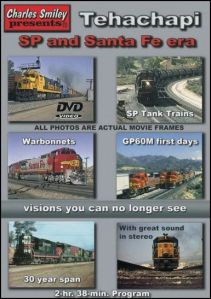 Tehachapi Loop is one of the most famous railroad locations in the world. Rich in history, the area is a hotbed for; trains and railfan photographers. This show covers over 30 years. Southern Pacific and Santa Fe are the featured railroads. Charles often expands with a ‘above and beyond’ presentation style.

While there are a variety of Tehachapi titles on the market, and some are well done. The uniqueness of a Charles Smiley offering is worth consideration- even if you have others.

This new release could be definitive.

Let’s review and see for ouselves.

The shot that everyone wants to see. This train will reveal all Santa Fe GP30 locomotives in the lashup. This is where a train passes over itself, on the Tehachapi Loop.

Notice the cleaner locomotives of the vintage SP. A Cotton Belt SD40T is on point.

To use a single word for Taylor Yard circa 1978… crowded! Model railroaders will surely appreciate these scenes. 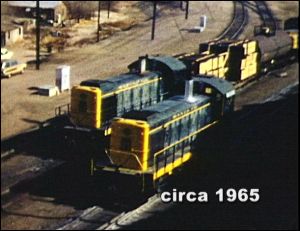 There are plenty of Santa Fe pinstripe scheme diesels.

Judicious usage of his custom made maps can display, routes, elevations and trackage.

Naturally, the expected location names are here. Additionally, Cajon Pass, Taylor Yard. and San Bernardino are a sample of what else is visited. Some of these are featured at length. 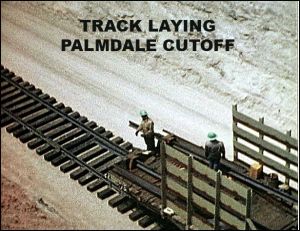 Historical aspects are another cornerstone within CSP shows. See the 1967 Palmdale Cutoff. A freewheeling narrative that is highly detailed.

Charles performs the narrative. This is non scripted, and contains a master class on railroads. 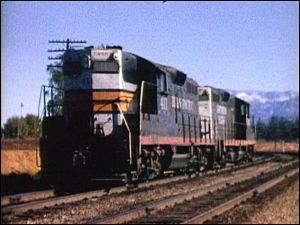 Soundtrack has a large supply of natural and builder accurate locomotive sounds. Various musical backgrounds are another part of the audio. The narration is balanced with some non narrated  trainwatching.

This program is a double feature. There is contemporary, 1990’s era Tehachapi. Vintage film has a great overview of Southern Pacific and Santa Fe operations in the 1960’s and 1970’s. 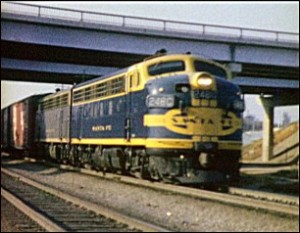 Viewers will enjoy 90 minutes of digitally restored and enhanced vintage Kodak color film. This feature alone, is worth the price of admission. A wide assortment of locomotives and views.

* This is frame by frame restoration. Charles has the goal of providing the best for viewers.

Helpers are operating both mid-train and as pusher sets. The Alco units were demonstrators. Learn about SP and why some locomotives were pulled from the mainlines.

Some nice scenes that display the freight cars of the time. Interesting, to compare the shades of boxcar red on this train. 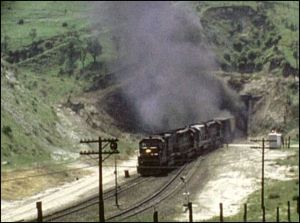 As this Southern Pacific freight exits a long tunnel, the sooty exhaust billows from the hole. 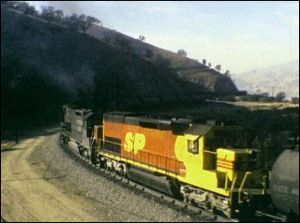 Oil Can train with an SD40T-2, in SP Kodachrome repaint, as a mid-train helper.

After the vintage centerpiece, we are returned to the 1990’s. Both of these eras are enjoyable. 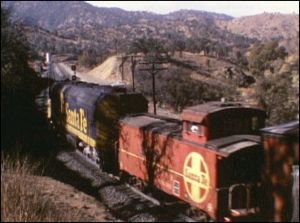 We have just skimmed through a show that exceeds 2 1/2 hours. There is much more to see.

Charles Smiley has the definitive Tehachapi program here. Combining vintage and modern, this high quality production is an immediate classic.

Railfans and model railroaders will find this new release a comprehensive overview of Tehachapi Loop, with surrounding areas.

This great show is easily in the top of the Charles Smiley Presents catalog.