Steam in the East Series

B&O steam was still operating between Garrett, IN. and Willard, OH. towards the end of the steam era. The T3 Mountain was built by the railroad and this story features this class. They originally had forty of these. More were constructed, this was a workhouse engine on the line.

Additional steam types are present in the show. Mikados, Consolidations, Pacifics, Santa Fe types and articulated EM-1 engines can be found. Occasional 1st generation diesels as well. Even former Boston & Maine Mountain locomotives. A comparison to Chesapeake & Ohio steam with some C&O footage is within this release.

A multitude of runbys. A wide variety of freight trains. Passenger examples have named and numbered assignments. Some worthwhile freight car views. 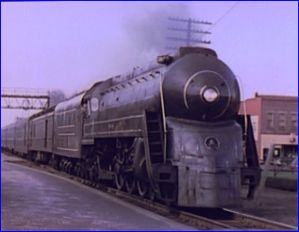 The Cincinnatian gets extended coverage. Streamlined steam was rare on B&O.

A sidetrip to Parkersburg. This provides a handful of shots.  A two level operation there.

Color film that appears to be 16mm. Has dubbed train sounds. On screen location and train designation graphics. Chapter menu is included and was added for the current DVD. An older release, there are no maps. Narrative offers many locations.

Narration by original producer, Alva Morrison. Good information on various steam power. He covers some B&O history too. Various sequences are train sounds only. Remastered and re-edited in 2007. Some of the edit transitions are rather jarring and break the rhythm. The program feels a little dated overall. However, the film enhancement has the trains looking good. 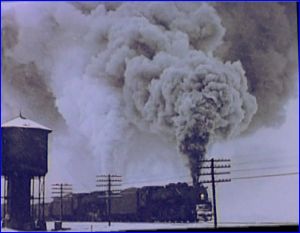 The cameraman was out in the winter. Double headers often were a Mountain- Mikado. 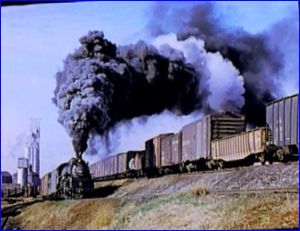 A dramatic scene which demonstrates the cinematographers flair.

Cinematography is nicely done on the whole. There is miscellaneous minor camera shake. More occurrences than wanted. Considering the scarcity of the color B&O steam footage, it isn’t a deal breaker. Composition is generally fine.

A fantrip has railfans occupying a yard and with unrestricted access on the tracks. 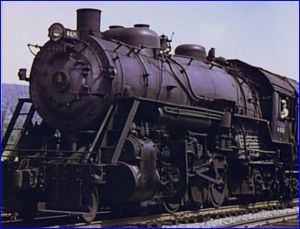 The EM1 was one of the smallest 2-8-8-4 locomotives of that wheel arrangement. Authentic EM-1 recordings were used. 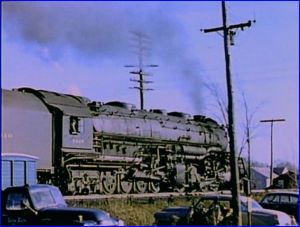 The Cadillac with the open doors seems to be Guy’s car. A sense of size to the big EM-1  shown here.

This caboose is leading a reverse move with a steam crane. The train is going to a derailment.

Baltimore and Ohio is an action packed program. A bountiful supply of steam that should satisfy most viewers. There is much more to see. One for the family to appreciate.