Here we have two famous Union Pacific steam locomotives. UP 844 and UP 3985 are the co-stars in this film from 1999. The Northern (844) and Challenger (3985), are doubleheaded in a fantrip to Railfair 1999. This is seen in a broadcast quality show. Natural, environmental live audio transports viewers to the scene. You can hear some occasional  helicopter noise and crowd noise. The locomotive sounds are dominant. Mainly, you hear the train sounds, unobstructed as the engines traverse the route.

Actual screenshots from this program.

There is a narrator, who sets up some scenes. Cuts to actual Union Pacific personnel add an inside perspective throughout the program. 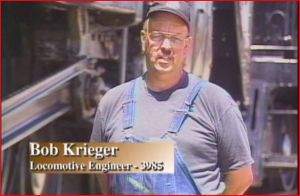 Bob Krieger is an Engineer on 3985. He has interesting commentary. Mr. Kreiger is a wealth of information and personal experience, which really helps make the program work so well.

Alan Shelly offers an insightful, and personal viewpoint. He was a Cab Forward Fireman.

No extras on this show. That is maps, chapter menu, or hidden chapter access. Given this an older production, that will have to do. It does not detract from the presentation. A single basic introductory map shows the general area.

The old Southern Pacific/ Central Pacific route is the mainline over Donner Pass. The special excursion train does have some unexpected difficulty on the trip. 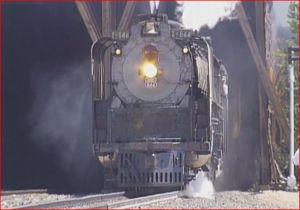 Northern 844 is the lead locomotive.

Union Pacific Challenger 3985 is the second loco in this lash-up. Diesel UP9460 is behind the steam engines for additional power. Those dynamic brakes will come in handy. 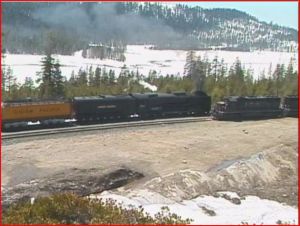 Much to the Engineer’s chagrin,the train has a big problem, while in a tunnel. The crew stops at Norden . The engineers convey the story of what happened at Tunnel 41.

Spectacular scenery provides the perfect setting for this outing. Even in the month of May, snow is on the mountain.

Cinematography is excellent. Those 40 locations do take viewers along this wonderful journey. There are many vantage points with a nice variety of views. Close-ups, onboard, scenic wonder shots, with crowds, or isolated in the wilderness. You will be entertained. 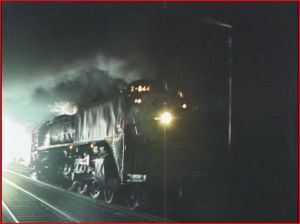 Sequences like this inside a tunnel shot, are an element of what sets a BA Productions show into a class by itself.

The towns along the way offer more views of the passing train. It is a great looking consist with solid UP colors. Dome cars and a tail car sporting an open rear platform give that vintage vibe!

This train was going to California with a dual purpose mission. First stop was to rededicate Roseville Yard. A muti-million dollar renovation had been deemed worthy of the special visit. Richard K. Davidson, UP President is viewed speaking at the dedication.

Railfair 99 was the second destination for the steam train.

Steve Lee is a household name among railfans. He is Locomotive Engineer on 844. Mr. Lee did serve as the head of the UP Steam Program for years. See BA Productions title called, Big Steam 844 for much more from Steve Lee.

The 844 had a mechanical problem. Steve explains the problem and action plan for repair. So, the 844 is towed in the train on return to Cheyenne. A diesel leads the train on the return. The 3985 is still operating and supplies a good head of exhaust plummage.

The return trip does present the train in a different light. Here there are a prevalent amount of natural audio and musical  interlude scenes. This portion is very much like the current BA Productions releases. Speaking of that, the whole show has a similar overall style, that match well with the documentary type show. In many ways, this resembles a PBS style program. Compare with the newer Big Steam 844 and see how the elements have been used to an even greater level of integration.

Steam Over Donner is an enjoyable look at two magical steam locomotives. The high quality film, fine audio and employee commentary, do result in an engaging show.

Steam fans, UP nuts, Railfans and anyone with an interest in railroading, will find this an entertaining and informative show.