Electric Rails around the Bay 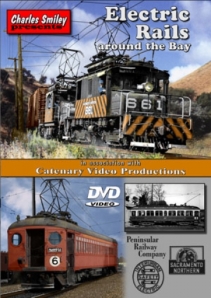 Charles Smiley has a three for one program of classic traction. This show features electric lines around Oakland, California. If you have enjoyed his comprehensive series on The Key System, this one adds much more to the story, around the Bay Area.

For those who have been considering a traction video, regular freight service on Sacramento Northern is a major highlight. More on this later…

Penisular Railway is the first, of the three major lines here. This line is shown from early 1900’s to 1938. A combination of film and still photos, illustrate the history. Early views of towns, such as Los Gatos are seen. 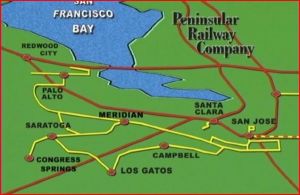 Charles spends much time, and effort on the custom maps for each program. These maps help with understanding, the scope and scale of an area. The maps are plentiful. Frequent references are useful to keep up with the storytelling.

SP Red Trains are up next. Ferry boats are an integral part of Bay Area operations. Of course, this pre-dates the bridge! Alameda shops are viewed.

Alameda in 1939. This demonstrates the type of high quality cinematography present throughout much of this program. Film quality ranges from excellent to very good. Much of the color footage is in 16mm. Black and white film is also used. The many sources span 8mm to 16 mm formats. All of the films are viewed in the best possible state. The show looks fine. Some train sounds are included. It is a relatively quiet soundscape. The musical portions do liven things up.

As a whole, the presentation is in a PBS television style format. A wealth of historical information and some period music, balances the vintage film. Charles has a highly informative narrative. You will need multiple viewings to absorb the large amount of detail.

Street scenes are abundant. On screen graphics are nicely integrated.

Backgrounds are as fascinating as the time machine effect, of viewing a world gone by.

There are many sequences filmed from onboard these heavy electrics. The Southern Pacific Red Car operations have a familiar railroad feel to them. For any newcomers to interurbans, this line is an easy transition from regular railroading.

Sacramento Northern is seen in the 1950’s in rural Contra Costa County. This is a great look at the line. Regular railfans will delight in the SN freight trains shown.

This map provides the southernmost SN lines. Many locations are visited on SN. Both passenger and freight service are reviewed extensively.

Charles Smiley has a big winner in Electric Rails around the Bay. The all vintage film is fascinating to watch. His sharp narration moves the story at a brisk pace. After viewing numerous ‘interurban/ trolley’ shows, this is one of the best!

Any railfan who is interested in exploring this type of railroading, will find this show satisfies. Southern Pacific and Sacremento Northern, do contain enough regular railroad character to have some familiarity.

An outstanding and comprehensive program about the three electric lines.

1 thought on “Electric Rails around the Bay”