Winter Rails Over Donner: Day of the Spreader 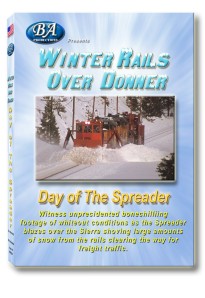 Donner Rails has several titles about Donner Pass operations. This one specializes on a large piece of equipment used to clear heavy snowfall. That is called ‘The Spreader’. In this program snow removal is the basis for seeing the spreader in action.

In fact, the Donner Rails company shot over 35 hours of film! This was done in a six year time period. This one hour show, has some highlights from the cache of raw footage.

The overview of snow removal also includes a detailed chapter menu with: Flanger, Spreader, Norden, Derailment and Spreader Ride. A preview section is also listed on the main menu, along with play program.

Crackling Union Pacific radio traffic transports us into the world of ‘Snow Service’. We are in the cab of an operating spreader, in a heavy snowstorm…Stylish introduction.

An informative narrator will guide us and outline a hefty portion of information. Regular Union Pacific Railroad employees, also play large roles in explaining the tasks involving snow removal. Some 2003 footage shows Southern Pacific GP38-2 units with UP renumbering. The 2000 horsepower GP38 units are specially equipped for the tough assignment. 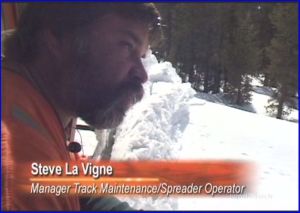 Viewers who have seen other Donner/ BA shows will see some familiar faces from other shows. All of the employees are knowledgeable. They freely share stories and information. You are missing out, if you have never heard this style of commentary. It is major, ‘inside access’. Engineers, Conductors, Snow Equipment Operators/ Crews, Foreman, Track Workers, Managers, Heavy Equipment Operators, and a retiree or two, really move the show along. In this feature, they all have experience in ‘ Snow Service’. This is a volunteer service. Those men are dedicated to doing whatever it takes to keep the lines open.

Spreaders have two 18 foot wings on each side. They have special windows that appear to be taken off an ocean liner. In fact, they are the same! Special Porthole, whirring glass keeps the windows clean, in any weather. The spreaders are comparable in size to the locomotives. So, you can see- they are very large pieces of equipment.

The Spreader is highly interesting to watch. Many different views show us how the spreader works. The spreader trains are seen in various weather conditions. Day and nighttime scenes reveal the around the clock operations. Teamwork is essential to clearing the tracks. Sometimes men are seen lighting fires on frozen turnouts. In general, co-operating with other snow removal equipment operators, all have their roles. This goes right to the trackworkers with shovels! 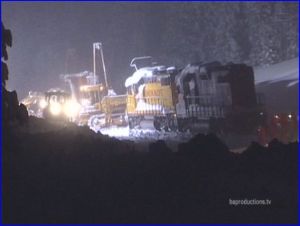 Derailment does have a spreader train in difficulty. Locomotives and the spreader are on the ground. Snow is falling rapidly. The CAT bulldozers and 4×4 crews rush over to assist. A big, front end loader and more heavy equipment works all night to rerail the train. Track gangs fix the rails. A 12 hour job! Normal hazard of snow removal. 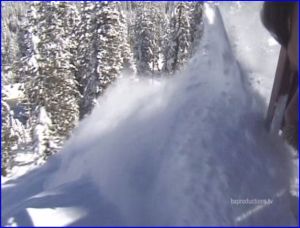 Cab ride has the viewer riding on the spreader. Amazing, to see the amount of snow the wing can move!

An artistic sequence focuses on the spectacular winter wonderland in the Sierra Nevadas. This conclusion has the: artful cinematography, relaxing music, and employee commentary, that is further developed in later BA productions shows.

This is another excellent release from Donner Rails/ BA Productions. Brendan Compton is the man behind the camera. He directs the show. Even though this one is a few years old, it has many of the earmarks of a Brendan Compton program. Everything included here, is as much fun as the more recent shows. An outstanding presentation!