Green Frog has taken a longtime favorite, Santa Fe Odyssey Volume One and digitally remastered the show. This was originally filmed in 16mm, all-color film. Previous releases in VHS and DVD format have always looked good. American Train Video Reviews had previously reviewed the 2001 DVD version of this show. It was a highly rated program . The big question: Does the new release improve upon the earlier version?

Going back to the original High Definition 2D masters, Green Frog has modernized this fine show. The advertised toots the day and night comparison  of the 2011 version.

Having both copies of a non-remaster and the newest 2011 digital remaster calls for a comparison. A note on packaging is important. The outer packaging is identical for both versions! Green Frog has been notified of this, with a suggestion for notification to be added to the newer version. On the inside, both DVD’s are appropriately labeled. Buy from a reputable seller, or you may end up with a non-remastered show.

A highly detailed chapter menu, makes navigation a breeze. You’ll want to revisit favorite locations on this sprawling double disc set. There are also the audio selections. Stereo and Dolby 5.1 surround. Narration is switchable as on/ off.

Narration is the high standard that we expect from Green Frog. An excellent script with smooth, professional narrative by Peter Youngblood. Natural train sounds are present and they sound great.

On both versions, this is an extraordinary look at Santa Fe in 16mm all-color film. Emery Gulash was one of the best cinematographers of railroads. Expert composition, and with a great eye for the perfect shot, Emery’s work is fantastic! A very prolific catalog of film has been distilled into this ‘best of Santa Fe’ show.

A cornucopia of classic locomotives, passenger trains, vintage freight cars, cabooses and classic ATSF stations are all present. Great and varied locations, showcase the Santa Fe in an intriguing fashion. The timespan allows for comprehensive coverage of the railroad.

The remaster has some major image upgrades. The colors are more vibrant, without seeming fake. True authentic colors are immediately noticeable. Color balance is enhanced. The subtle shades of foliage, and not so subtle give an improved scenic framing for the trains. Some patches of old snow are another example. At times, there are small branches, and some weeds in the foreground that weren’t very noticeable before. The blue skies with clouds look better.

Santa Fe’s stucco and tile roof station has a mellowness to the color scheme of the buildings, a true to life feeling of being there. Sunlight has an extra warmth to the scenes.

The trains themselves have an increase in sharpness. They just about jump out of the screen, and into the room! The Super Chief, Grand Canyon, Super C and the rest look spectacular. 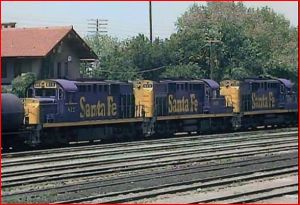 Blue and yellow diesel led freight trains. Yes, these are also enhanced now. EMD GP20 and Alco Alligators are some of the classic shots. 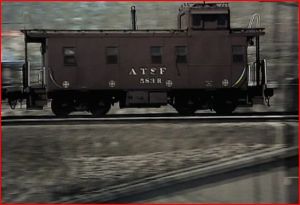 Even the old style, brown ATSF cabooses are more vibrant.

Distant shots emphasize the terrain and scenery. As the train gets closer, that gets the visual attention. The passing trains are a delight. 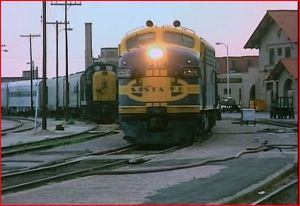 Amarillo, Texas has that great station and EMD F7’s along with the Alco RSD5. The San Francisco Chief arrives and looks superb. Emery has some excellent scenes of dusk and nightfall. The light glistens off the shiny warbonnets. A long lashup of GP30’s roll thru with a freight, at night. Morning has Alco PA’s. Amazing material.

Model railroaders can have a field day with the weathering alone! Many different years, locations and seasons offer a wide array of ‘seasoned equipment’ to study. Passenger trains are worthy of some focus on their various degrees of road grime. Freights are the best, there was an interesting mix of old and new railcars. Check the many shades of boxcar red.

Raton Pass has some action of F3/ F7’s on the point of a freight with an Alco pusher set. A warbonnet led set of F-units are serviced, as more mail is loaded at the station.

Emery gets a great pacing sequence with some weathered F7 units.

Disc 2 has the continuation of this 26 year odyssey. One of the newer inclusions is the introduction of the warbonnet freight scheme. Burlington Northern has pool power on unit coal trains. The Cascade Green paint is a spot-on match. Good action on the Joint Line. Amtrak is also found in part 2. The warbonnet F units serve into the 1970’s. Super Chief/ El Capitan is lettered Santa Fe FP45’s,with an Amtrak unit, on this Amtrak train. Complete Amtrak trains appear, like The Southwest Limited, as the timeline moves forward.

We return to some of Emery’s favorite locations over the years. This is similar to a time machine like viewpoint. As the railroad becomes more modern, much of the rest stays the same. He also visits some new places. Some bicentennial items are seen.

On it goes with the higher quality viewing. One other comparison of note. There are less shadowy shots. Much of that has been brightened up.

Overall, the improvements are dramatic. There is a striking difference with the 2011 release.This is a major upgrade over the last version on DVD. Santa Fe fans, this is a must see program. Any railfan or model railroader will thoroughly enjoy this Santa Fe Odyssey Volume 1.

Green Frog highly recommends the Blu-Ray edition, for those who have that equipment.

Day and night change in the show?  Yes, that is the new 2011 digital remaster.