Winter Rails Over Donner : Night of the Flanger

This was the first volume in a series of three, by Donner Rails. They are now sold by BA Productions. This show was 3 years in the making. A single DVD. 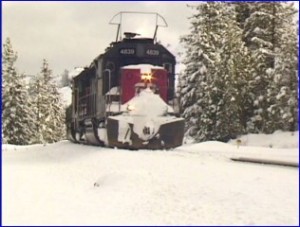 Donner Pass is a legendary winter battleground for Southern Pacific Now, into Union Pacific Railroad. This program has modern snow removal along the route. There are different pieces of specialized equipment, for this important task. The flanger and it’s customized diesel locomotives, are the prime snow fighters here. This producer has extraordinary inside access: to the employees and the special gear used to clear the lines.

The DVD has a chapter menu. Outtakes and Previews are also listed on the main menu. The three chapters are: Historical, Operations and Night of the Flanger. 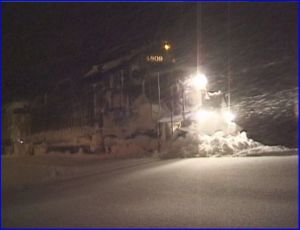 Another unique presentation from Brendan Compton. His train videos are in a modern style of his own. The people on the show, are the narrators. They share their own experiences. These friendly folks, give us links to the history of the line, and how things evolved there. Often, they are smoothly segued from one to another in a seamless fashion. Some relaxing musical backgrounds are perfectly inserted in the show. 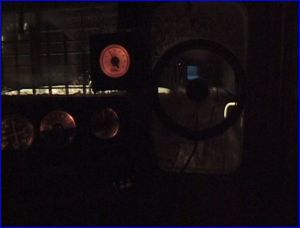 An in depth look at the snow removal process is key. Rides in the locomotive and flanger give us some wonderful viewpoints to share in the experience of snow service. Spreaders, Rotary Snowplows and Caterpillar bulldozers are seen. As advanced as snow removal has become over decades of developments, there is still some manual labor involved. We will climb down, in the middle of the night, to hand shovel snow at turnouts. 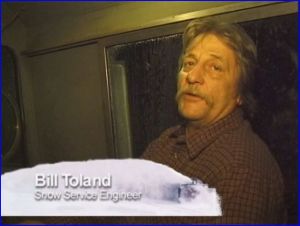 Not lacking for an experienced group of snow service specialists, some stories are shared. Of particular interest is veteran engineer Bill Toland. His hire date was in 1974. Besides being able to view him at the locomotive controls, he will offer much information and some great stories as well. Listening to him speak in the locomotive.. he is the heartbeat of the show. A knowledgeable Snow Service Engineer…. no doubt about it.

Many other ‘Snow Service’ specialists offer much to us. James Mahon, aka ‘The Bear’ is another interesting man up there. A Roadmaster at Truckee with nearly a half century of service. Rather soft spoken, an expert on the mountain and widely respected. Richard Steinheimer is the famous railroad photographer. There plenty of others with commentary. 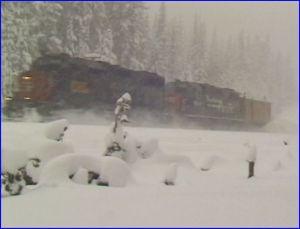 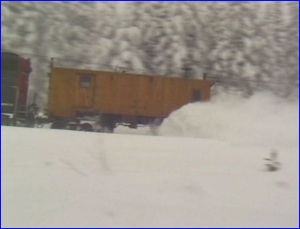 The modern operations are a highlight of this wonderful program. Awesome views of the flanger train demonstrate the speed and volume of snow encountered. Both Southern Pacific and Union Pacific locomotives pull the flanger. John Kuehl describes old wooden flangers that he rode and more. This conductor began in 1963.

The balloon track is viewed and it’s purpose explained. Steam locomotives and rotaries are briefly seen. A cab forward in a snowstorm is one of some assorted vintage shots. UP even employs a consulting meteorologist with forecasting responsibilities, including the Overland Route.

Night operations give us a chilling cab windshield viewpoint of the snow covered right of way. All of the operation feels more intense without the reassurance of sunlight. Engineer Toland seems relaxed, yet he diligently moves his train with an SP GP38-2 engine pair, through a storm. He discusses, in detail, about operating in winter conditions. The loco has special rotating windows, that stay clear, even in a snowstorm.

Dick Shorrock is a Snow Service Conductor, hired on in 1979. He is the Conductor in the cab with Bill Toland. They are seen, working as a team. Terry Bell, the Brakeman rides in the flanger. Our train encounters ‘white out’ conditions. It has to stop for evaluation of the situation. This is full on snow clearing in a winter storm.

When daylight returns, there are some spectacular mountain views. Brendan appears to have climbed outside to get some close-ups of the plows at work.

The history of the railroad in the area is examined in a PBS style presentation..  The Roadmaster at Donner Summit ‘The Bear’ has had decades of snow service. The SP City of San Francisco is the most famous train that was trapped for 5 days. A passenger that was there and the railroaders commentary describe the event.

An extended feature on the old, wooden snowsheds is intriguing. Red Mountain Lookout and the fire problems are reviewed. Steam powered fire trains were on standby 24/ 7. A map displays the multiple locations of the fire trains.

The camaraderie of the snow service personnel are mentioned by everyone there. Ed Wiseman and Dave Bowler are management who fill in even more about this story. Check the hire date of 1959 for Ed Alexander, Engineer and Rotary Snowplow operator. They talk about the family of snow service, there are many years shared by these people.

The whole production is first class. Excellent videography with a multitude of exterior and interior views. Audio is crystal clear. The people make the show here. Plenty of action, along with the talking heads. They are an interesting group to hear.

A fascinating show of the winter operations at Donner Pass. The combinations of interviewees, historical and contemporary films are very effective. Viewers will come away with much insight from the railroaders. A basic grasp on what goes on during a winter storm at Donner Pass, can be learned from this feature.

A satisfying look at the Winter Rails Over Donner. Accessible to any viewer, railfan and otherwise. This is a great show, with the insider’s viewpoints. The show is enjoyable and leaves us wanting more of the same…