A very comprehensive program by the multi- talented Charles Smiley. The Burlington Northern merger of 1970 was a huge merger. Major railroads combined: Great Northern, Burlington Route, Northern Pacific and Spokane, Portland and Seattle into the BN. Subsidiary lines such as: Colorado and Southern, Fort Worth and Denver are included.

Historical aspects and the focus on past rail barons such as: James Hill of Great Northern and E.H. Harriman of Union Pacific make a worthy basis for this story. James Hill became known as The Empire Builder. Teddy Roosevelt becomes a trust buster. The remaining merger roads are effectively covered as well. 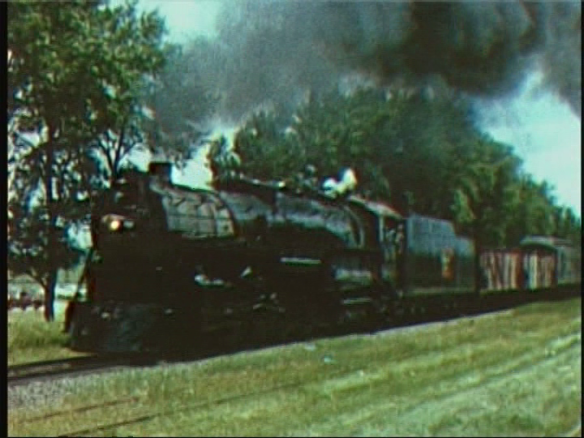 The high-flying Charles Smiley is a generous host. There are many assorted views, and often relevant talks about other railroads. EL, GM&O, DRGW,  PRR, WP, MILW, ROCK, UP, SP, ATSF and more! 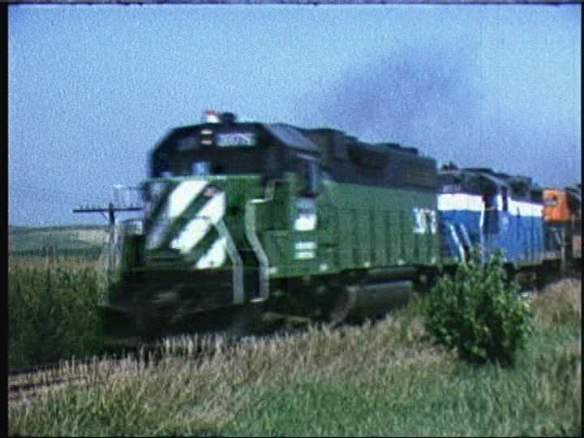 Burlington Northern was merged in 1970.

Charles backs up into the early mergers. That pre-dated the later, even larger ones. His attention to detail, is what sets his programs apart. Charles does the narrative.

Audio soundtrack, is an accurate one. The locomotives that are passing by the viewer, are the sounds that one hears. An EMD is correct, as is a GE, or an Alco. Musical background is used elsewhere.

An assortment of; period photographs, illustrations and other items, are used in a PBS style presentation.

Some people correctly make note of overlapping footage in some CSP shows. This is needed to ‘tell the story’ of a given railroad. As the prototypes connect and interact, so do the stories. As Milwaukee Road interaction or implications, is discussed, why not see Milwaukee Road? 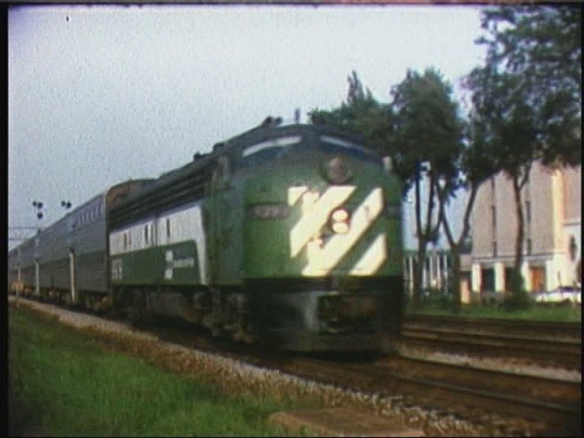 There is a chapter menu on this DVD. All Charles Smiley releases are manufactured  glass mastered DVD’s. Highest quality and better durability are another bonus of CSP.

This E9 is before, the orange/white,  highway style nose stripes. 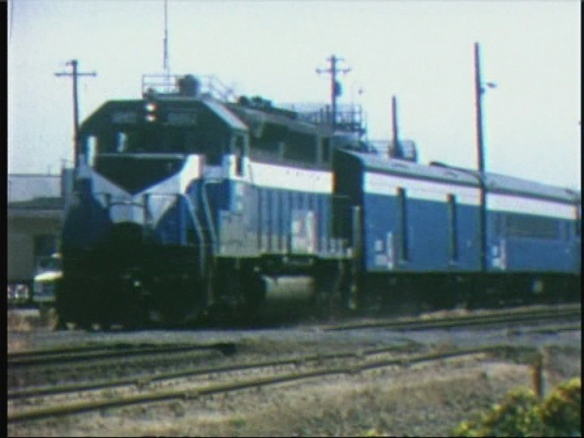 Charles continues with his winning style of presentation. Much like a PBS broadcast quality program, these shows are some of the best available train videos. His thorough,  detailed discussions provide seemingly limitless information. Inside information often brings points to light of how railroading has evolved. Fascinating!

Subject features are in a plentiful supply. Viewers will come away with historical knowledge of wide-ranging subjects such as: Panama Canal, Ralph Budd, Western Pacific’s Inside Gateway, CB&Q Zephyr, World War 2, California Zephyr, Baldwin, Alco, and plenty of additional. 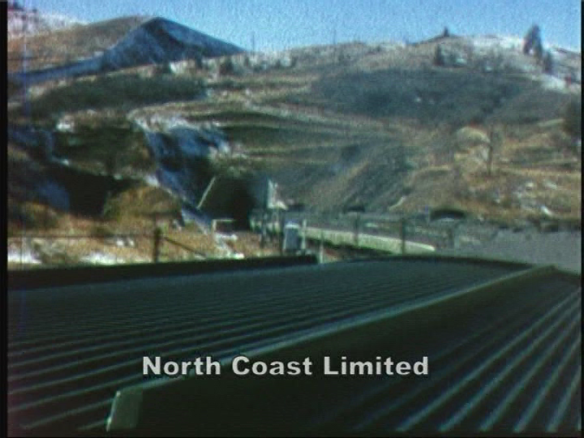 The cornucopia of trains is nearly overwhelming. You will need multiple sessions of viewing this show, to take it all in. All digitally re-mastered and painstakingly added natural sounds make for great sequences. Mainly 8mm color, with limited black and white footage. 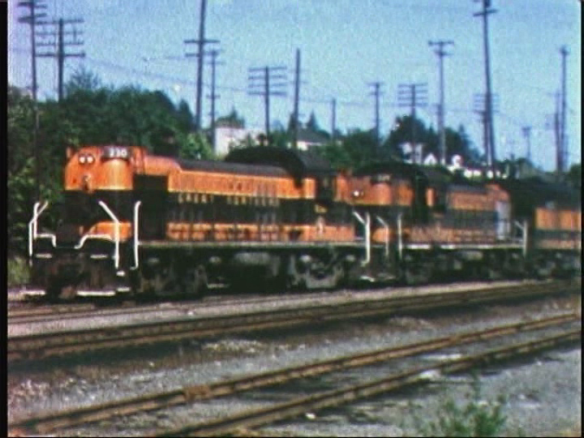 All the diesel makers that supplied the Hill Lines are discussed and on parade here.

Original paint schemes from the BN locos, are seen in early BN renumbering for ICC compliance. Note the removed signboards on this ex: Great Northern.

Look for the small lettered/ renumbered units.The BN roster was vast, and there is just so much to see. Color film from the 1950’s to 1970’s, is very satisfying.

Many rare locomotives are viewed on ‘in service sequences’ in all types of terrain. There are terrific mountain railroad shots. 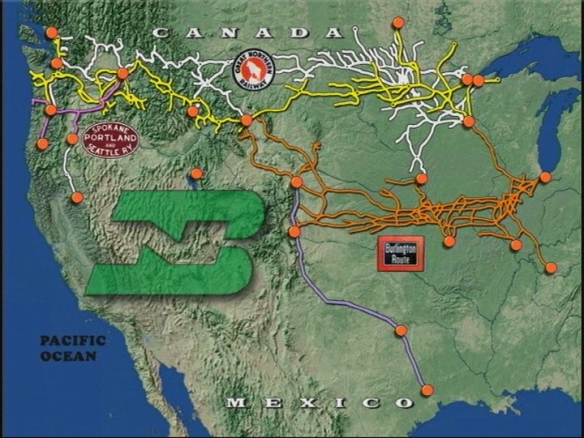 Custom made maps are always a highlight bonus on a CSP release. This show provides looks at system maps for multiple railroads. They are shown as needed, to enhance a discussion. Local maps are used to facilitate understanding of a specific area.  Kudos!

Chicago, Burlington & Quincy has nice coverage. Ralph Budd and his successful introduction of the speedy Zephyr rolls film back to 1934.  An array of vintage film goes right along with the story of the CB&Q. Stainless steel Zephyrs, Black & Gray ‘Everywhere West’ and later Chinese Red color schemes are … everywhere!

Great Northern provides some spectacular backdrops for those trains. James Hill is shown as the force behind the creation of Great Northern. The mountainous crossing  of the line across the wilderness. Alcos are seen in the 1950’s- 1960’s. Main supply from EMD, were the bulk of the Hill Lines. 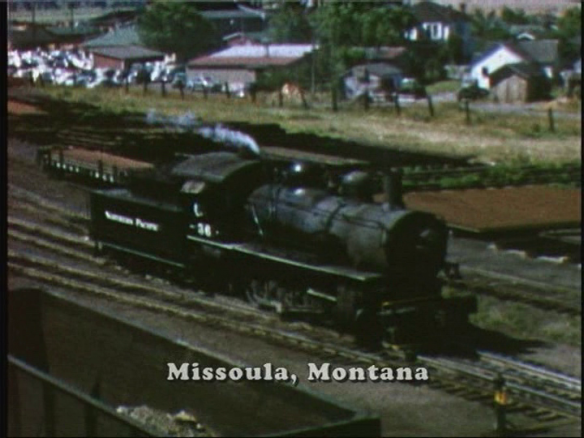 NP leads a feature set on steam locomotives. Much color footage and a transition to a CB&Q steam sequence with extra screen time.

Cascade Green, Black and White of the Burlington Northern are a change from the complex earlier paint schemes of the old roads. First generation power is abundant. Newer locomotives and repainted cars spread the new BN image.

The special feature on Western Pacific’s Inside Gateway is a movie within this movie. Keddie Wye and area are visited. Old, smoke belching Alcos, mix with 1st and 2nd generation EMD power. Much scenic footage and raw diesel power to savor. Close-up views put you trackside, in this mountainous region. WP plus BN locomotives pulling vintage freight trains. 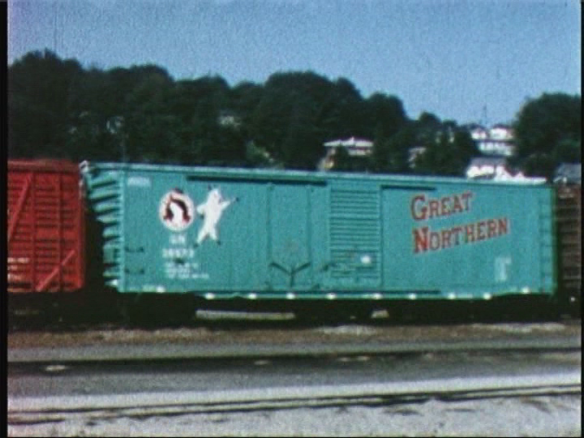 Classic freight cars and named passenger trains are the right ingredients for excellent trainwatching. Rare Alcos lead the way on some trains.This is a railfan’s delight! 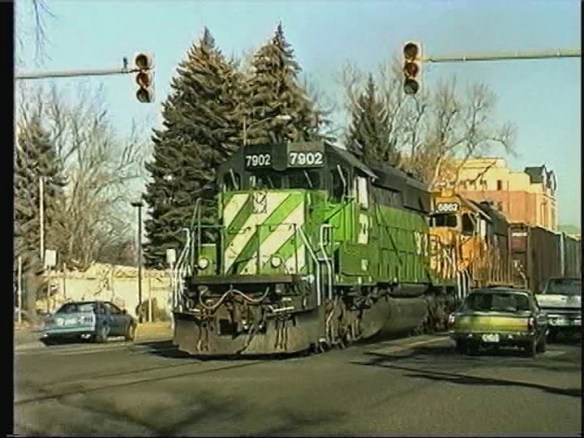 Fast forward to a 2001 update. A few minutes in the BNSF era. This scene of street running at Fort Collins, Colorado.

This program is one that is hard to step away from. You never know what is coming next! If you only could own a single BN train video, this is the one to have. 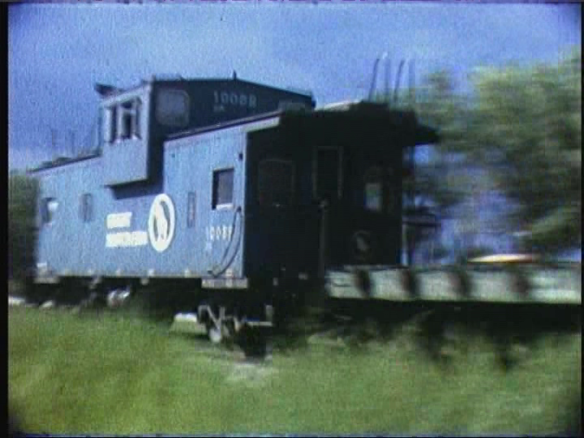 The Burlington Route caboose was easy to spot, even when repainted.

Empire Of The North: The Forming of the Burlington Northern.

This show  is an instant classic. An instant favorite!