Steam in the East Series.

Alva Morrison has the original production credit.Some Alva Morrison history is contained within this review. As I learn about Sunday River Productions, their history is a story to be shared. They are a very well established company, and have been around for decades, They might be ‘ the original train video company’. Relevant historical aspects will be included in some upcoming reviews. Some fascinating insights!

This show was updated, digitally remastered in 2009. A main menu has seven chapters and the standard play movie button. I have found the previous Sunday River programs enjoyable. 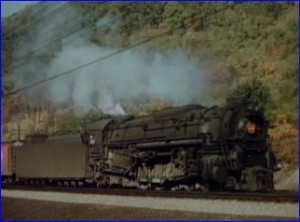 Pennsylvania steam engines all had the muscular, Pennsylvania Railroad look to them. The Standard Railroad Of The World, was their famous slogan. They needed to have powerful, tractive effort, to get the heavy trains over the mountain grades.

Opening the film is a Conrail freight circa 1989! The 3 track curve is hosting six locomotives. As the narrator explains, that we will now travel back in time…

After some brief glances at some steam in color, the story begins.

It is a black & white segment from the 1940’s- 1950’s. The 4 track mainline is in place. Our railroad sure is a busy one. This early footage was during a time when America was still moved by rail.  On parade are some Decapods and K-4 Pacifics. Traveling further back in time, film from the 1930’s is seen. The film is all quality, ranges from very good to excellent. 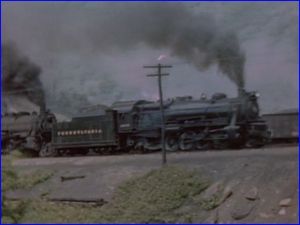 The K-4 is a classic, highlighted locomotive featured in this show. The movie bounces around in various years ; 1930’s to the 1950’s. Many other locomotives including; Mikados, Texans and Consolidations. Mountain class 4-8-2 are strong engines at work. Occasional on-screen displays show year or locations. There are numerous runbys. Passenger trains go blazing by the viewer. Some pacing shots do spice things up.

Do not be surprised if your woman does not care for the vintage b&w portion. This is smoky, manly steam era railroading! An action packed, old-time trainwatching pleasure. Action packed and loaded with runbys. Hardcore Pennsylvania Railroad Trainwatching !

Color explodes onto the screen, with the impressive dual service M-1 Mountain type. In its prime, the M-1 was likely, the best all around PRR steam engine. J-1 Texans were 2-10-4 locos, that exceeded the earlier Decapods in power. Another action driven chapter.

The natural sounds take center stage. Narration is sparse and very effective. Alva performs the narration. He was the brains behind this brilliant production.

The natural train sound audio is so well done, it becomes its own character. 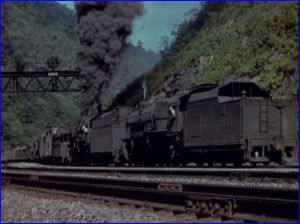 Horseshoe Curve is a vital and thrilling look at Pennsylvainia steam power. The Locomotives parade past, with all sorts of trains. Notice how every single engine has its own unique sounds. This extended portion is like time travel back to the 1950’s. This chapter alone is worth the price of admission. An absolute must see for a steam fan and any railfan. Everyone will enjoy this color film sequence combined with the live sound.  Exceptional  Chapter!

Speaking of chapters, listen to this piece of Sunday River history. Alva Morrison was the original producer, narrator and scriptwriter. Long before the advent of vcr home players and vhs tapes, he had made train movies. Started out making copies for friends. The demand grew and so did Alva’s business. Using the super 8mm film of the time, he distributed some of the train films on reel to reel.

The introduction of those vhs tapes was at a time, when Alva was already an active film producer. VHS format did require some updating. He was editing those shorter films into the longer format. Released those tapes, to enter the new market. Sunday River was probably the ‘original train video company’.

Those early reel and vhs films, were forerunner programs , of what is now available on a dvd. Alva had titled some of what are now current Sunday River Productions ‘chapters’, as the name of the film. So when we see a chapter title, that could have been ‘the movie’, back in the day. Some of his older movies do have those original ‘movie title segments’. They now are presented, remastered and updated, with additional film, into today’s dvd chapter format.

The final chapter is surprisingly titled : Diesels. Many vignettes of the Pennsylvania, and final scenes at Horseshoe Curve. Again, natural train sounds dominate this section. I enjoyed this part too. Perhaps, this portion was one of the early movies.

We roll-up into the 1960’s. A glance at Penn Central. Conrail closes on Horseshoe Curve.

This is an energetic look at mainline steam in Pennsylvania. The scope reaches outside of just viewing Horseshoe Curve. A map would have been helpful.

Steam on Horseshoe Curve is an enjoyable show to watch. Suitable for the whole family. Kids will like the smoke and sounds of the trains. Sunday River has a big winner here!